Hailing from Sicily, Oi Dipnoi draws deeply from the wells of tradition while creating a new sound full of personality, a charming and light fusion with elements of jazz and progressive archaic folk.

- Dipnoi are living fossils, an order of prehistoric fish that have vestiges of rudimentary lungs: during periods of drought, adapting to the environment, they take refuge in small, moist burrows and can breathe atmospheric oxygen. This is a metaphor that evokes the current music scene in Sicily: in the name of survival. -

The poetics developed by the Oi Dipnoi trio were born out of the meeting between tradition and innovation: one enriches the other in a constant dialogue in which the assets of the musical culture of the island are given new value. An inheritance from Valerio Cairone, a multi-instrumentalist who collected the melodies of the region. The protagonists of this heritage were shepherds, farmers, carters, a universe that was well explored by famous writers in Sicily at the end of the nineteenth and the beginning of the twentieth centuries. Thus the creation of an original repertoire in which the themes are developed and sustained by the diatonic accordion and Sicilian bagpipe, supported by the Nakaira rhythmic section with percussion, jew’s harp, electric bass and double bass by Mario Gulisano and Marco Carnemolla.

Their debut album “Bastrika” was released in November 2015 in Hungary by NarRator Records. There are also two special guests on the record, Dániel and Vilmos Gryllus of Kaláka, the most famous and long-established folk group in Hungary. Later, in 2015 the trio took part in the Festival I-ART, producing the show “Etnafjord” together with the Swedish female singers quartet Kraja. In their second album “Pontos”, released in January 2018, special guest the string arrangement by Laura Cortese & the Dance Cards from USA. In 2019 Latvian traditional singing group Saucējas and Oi Dipnoi met in studio for the very first time to produce a single, traditional song Maģa, maģa ābelēna (very little apple tree). The song was included in the compilation Sviests VIII, released in June 2019 by The Culture Management Centre Lauska. 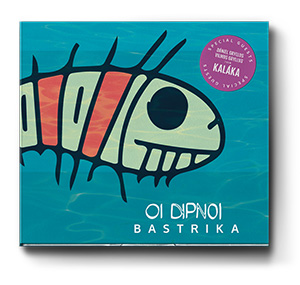