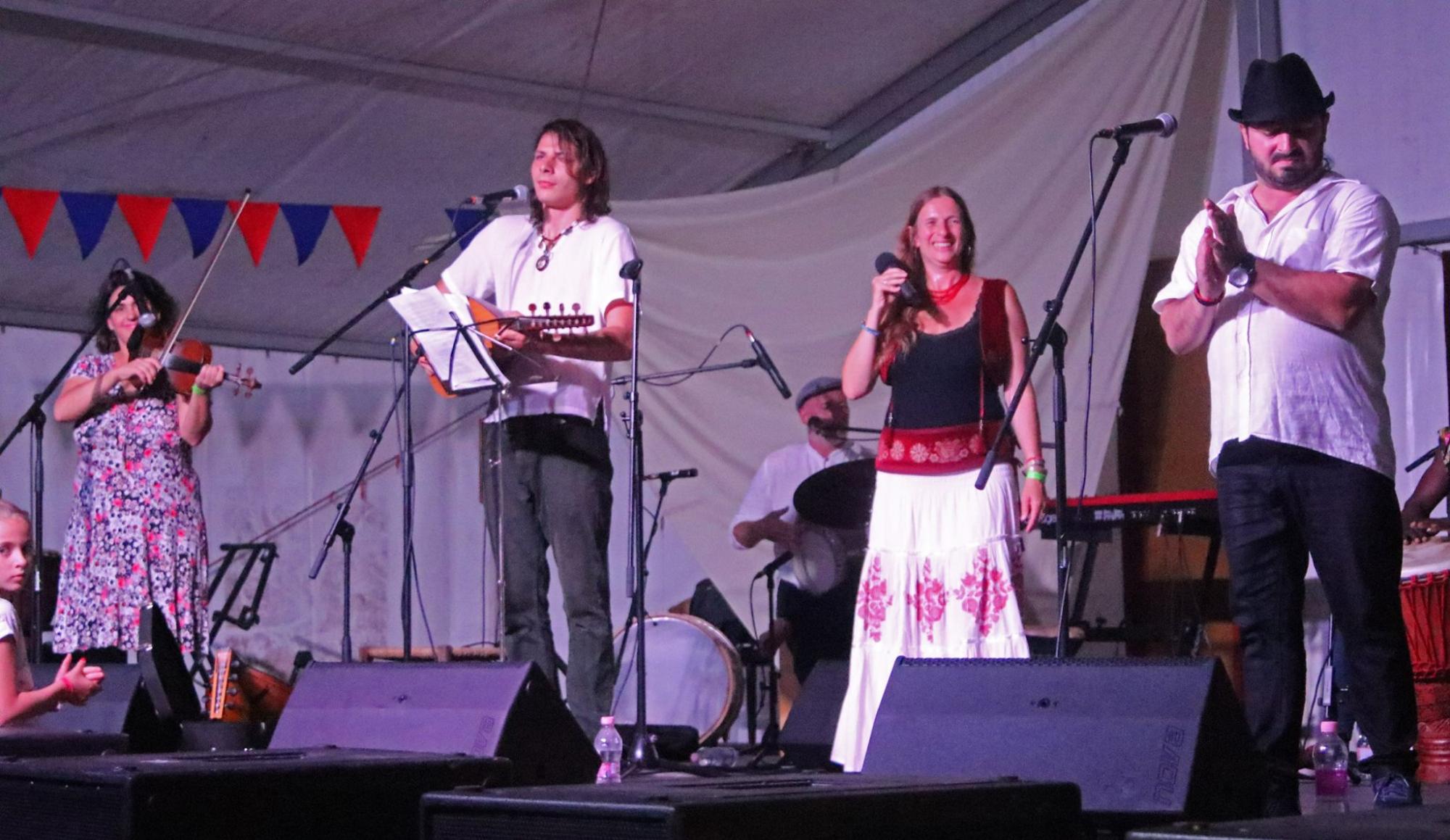 "It’s always a pleasure when a music group can choose an exact name and
this is what happened in the case of HolddalaNap Group.
Both spiritually and musically complementing each other, they have
an elementary impact on each other and on us,
like the Sun and the Moon."

„The best of Hungary’s world musicians work together the most relieving way in this charismatic group. HolddalaNap performs perfectly elaborated songs on the curly road between Hungarian folk music and flamenco music. What is even more special is the fact, that at their concerts they mix playfulness and ritual the most amazing way.” (Szimpla, 2017)

The group HolddalaNap ('MoonSingsSun', or 'The Moon with the Sun') was founded by well-known and experienced Hungarian folk musicians. Their debut album Dandala was released under one of top labels of Hungary: the Gryllus Kiadó, and has been recommended to the world music album nominees at Hungarian Grammy: Fonogram award in 2015.

They were among the 10 groups who represented Hungarian world music in Fono Café, the 0th day before the WOMEX 2015 in Budapest.

The leading Hungarian music journal listed the album among the top releases of the Year.

“The first impression of Dandala is their collective belief in the power of playing and singing together, and the love for each ethnic musical tradition as they bring it under a common denominator, while making all of these traditions they own as they build it into their own sound. What they do in the song Hold és felhő (‘Moon and Cloud’) should be taught in a world music class. The final song on the album (Itt ülök fenn kerek mennyben ‘I sit here in Round Heaven’) which is a cover of a Transylvanian prayer, is one of the best thing what happened in the modern folk scene lately.” (Lángoló Gitárok)

They work with two brilliant Romani singers, who sang with great success also in different WOMEXs: Guszti Balogh is a member of the group, and Monika Lakatos was the guest singer of their first album: she was one of the singers in the opening ceremony of WOMEX 2015 in Budapest.

The voices of the Hungarian singer and composer of the songs, Anna Gulyás, fits very well with the voices of her Romani friends. It is a music born from friendships and love, and listening them, You can feel that bombastic positive energy. All the other members sing also, so sometimes You can listen to 8 voices on the stage!

The members of the ensemble travel a lot, study Hungarian folk music and the music of other regions: Bulgaria, Spain, Romania, Persia, South America etc. They are also trained in classical and jazz music.

The outcome is magical: it reaches the soul and lifts up the spirit. At the same time it makes you dance and moves you to the depth of rituals. They often give concerts with theatrical and dance elements: their wish is to perform what they learned from the role of the music in their ethnographical journeys: music and ritual can be connected. The concerts in modern society have a ritualistic role, but the main point is where the trance conducts the soul: towards the center of the creation, in traditional rituals, and towards the strengthening of the community expressed culturally in different manners. So creating new music based on ethno music for us not only means to use patterns, elements, instruments, techniques inspired by ethno music, but more than that, to try to recreate the ritual role of the music. It is a fantastic experience to feel the lifting of the souls in the most different concert situations: in Finland with very quiet public, and one moment we all feel the air starting to vibrate, in Spain seeing the public in Mediterranean ecstasy, or in Hungary at a night bar where a traditional archaic Moldavian pray song reaches the heart of everybody…

The songs often deal with social, ecological and spiritual questionswith great empathy, like the life of gipsy people, or migration… The last song of their new CD is a prayer for peace performed in Hungarian, Arabian and Spanish.

At their kid’s concerts huge puppets, stilts and masks give special flavour to the performance. This concert has already travelled the country from the Children’s Island (Budapest), through packed summer concerts at lake Balaton to the MÜPA (Palace of Arts, Budapest) concerts.

At the concerts abroad the audience warms up according to their own temperament: the Spanish applaud standing and hopping, the eyes of the Finnish gleam and they move their big toe. According to the Romani singer of the group, the lyrics come from such a depth, that they understand each other with the audience anywhere: they get in one lightball from Rome to Zagreb, from Warsaw to the Mont Blanc.

„We are regulars in Zagreb. After our latest concert there a kind Croatian lady said: the concert was a fantastic experience for her, she felt as if her heart came to life. Her words touched our heart because we started the concert with the first song of our new album. we didn’t translate the lyrics, but it found it’s way home: ’Wake up the waters, wake up the fires, wake up the hills, wake up my heart!”